How Mold Can Be Impacting Your Health

How Mold Can Be Impacting Your Health

Mold is actually a type of fungi.  To date, over 100,000 species of mold have been identified.  As part of a protective mechanism, mold produces toxins called mycotoxins, which allows mold to keep a competitive advantage over other species.  There have been over 300 to 400 mycotoxins that have been identified as being toxic, but only a handful (10 to 20) have been noted as having an impact on human health. Some of the main mycotoxins that impact human health include aflatoxins, ochratoxins and macrocyclic trichothecenes. When the mycotoxins enter into the body, the can colonize on any part of the body with a mucosal lining, including the nasal cavity and the gut.

Mycotoxins are the toxic chemical produced by mold.  Different species of mold produce different mycotoxins. There are 6 main groups mycotoxins.  Because of the chronic use of pesticides, only the strongest molds are able to survive, which means that they release a high potency of mycotoxins, which then means it has more of an impact on health.  Specific mycotoxins pose specific health risks.  Food in which mycotoxins commonly occur include corn, peanuts, grains, tree nuts and cocoa. For example, aflatoxin which comes from a mold that commonly grows on peanuts and grains has been shown to cause cancer and other side effects.  Coffee sold in USA commonly contains OTA which causes oxidative DNA damage.  It is estimated that about 24% of individuals do not have the genetics necessarily (HLA-DR) to adequately respond to the toxic chemicals associated with mold.  If mold exposure were to ensue, these individuals would be more likely to develop symptoms such as headaches, joint pain, digestive issues, exhaustion, brain fog and anxiety, twitching eyes, and the list goes on.  This can lead to the development of a health condition known as CIRS- Chronic Inflammatory Response Syndrome, which can significantly decrease the quality of living in individuals impacted. 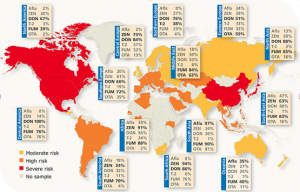 Historically, the USA has had extremely low standards of mycotoxin regulation  and as a result, USA, along with the rest of North America, has the highest risk of mycotoxin exposure, as shown in the map above.  This map, from Biomin is based off of 30,000 analyses and depicts the regions of risk for 6 major mycotoxins. North America is one of only two areas that has a severe risk for mycotoxins when compared to the rest of the world.  The most recent analysis by the Canadian Food Inspection Agency in 2013-2015 examined corn, oats, wheat and other grain products and found that close to 60% of the products examined had detectible levels of 21 different types of mycotoxins. There are currently no regulations or maximum levels of mycotoxins set for these commodities through Heath Canada which is concerning, especially given that it was determined that the levels of grain-based mycotoxins discovered in the foods tested did not pose a health concern.

Mycotoxins can create some pretty significant health impacts and for some individuals can be a primary reason that individuals are unable to improve health despite supplements and appropriate diet and lifestyle changes. Mold has been associated with poor mitochondrial function, oxidative stress, and decreased protein synthesis. It can also impact immunity including cellular, humoral and innate immunity. The symptoms of mold toxicity can vary from person to person.  It can present with symptoms similar to Lyme Disease (it is thought to trigger a significant decline in health in those with Lyme), it can cause respiratory illnesses and it can create chronic gastrointestinal issues such as IBS. A significant portion of individuals with Chronic Fatigue Syndrome can suffer from mold toxicity.  It is also often seen in individuals with MS, Parkinson’s, ALS, dementia, autoimmune diseases and cancer.It has also been associated with hormone imbalances including low testosterone. 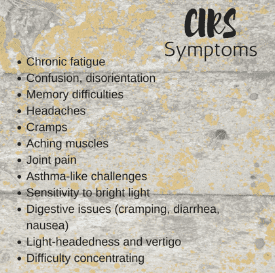 Mold requires moisture to survive and typically begins to grow as a result of some sort of water exposure on appropriate materials. Because a large portion of buildings are made out of plant material, when building materials become moist, it allows for the proliferation of mold. Mold can grow on carpets, wood, wallpaper, drywall, carpet glue, ceiling tiles etc.   Mold also tends to flourish in conditions that include darkness, warmth and existing spores. Time is also a factor.  Mold and mycotoxins in relation to food is discussed in section two.  Other sources of mold exposure can include through windows, in air conditioning and ventilation systems, cracks in the foundation and damage caused by flooding and rain.

When mold grows, it then produces its secondary metabolites, which include VOCs and mycotoxins, both of which are harmful to humans. The spores created by mold can contaminate food and clothing.  This means that even if you don’t see mold, it still could be getting onto your clothes and into your airways via spores. Unfortunately, even exposure to small amounts of mold can cause health consequences.

The most common mold visible in indoor environments is Stachybotrys, which produces black mold often seen in water damaged buildings.  It can cause significant health consequences including eye irritation, respiratory issues and dysfunction of the central nervous system.

For 75% of the population, remediation of the moldy environment, or moving from the moldy environment will be sufficient to allow the body’s immune system to identify and eliminate any mold producing biotoxins present in the body.  However, in the 25% of the population with the HLA gene (mentioned in part 2), mold exposure can lead to a mold illness known at CIRS (Chronic Inflammatory Response Syndrome) because the body cannot adequately clear the mold biotoxins. In this population, CIRS can be triggered as a result of exposure to a significant level of biotoxins, in combination with an inflammatory event (such as development of Lyme disease). For individuals with CIRS, a more specific and targeted protocol is required.

There are several different ways to determine mold exposure.  Testing is available that explores whether mold is present inside the body and emitting mycotoxins. Air testing also looks at the mycotoxin content inside the home versus outdoors.

The ERMI (Environmental Relative Mold Index) available through Mycometrics.com is another popular test which measures mold content in dust samples collected throughout the house by using DNA analysis.  However, this test is unable to identify the source of the mold exposure.

Discovering and removing the source of moisture is essential. The areas with visible mold should be cleaned.  However, it is important not to use bleach to clean mold. This is because bleach contains about 90% water, which actually acts as a source of food for the mold that is not necessarily visible to the human eye.  Concrobium is an excellent substance used to clean mold and is available on Amazon and your local hardware store.

It is also important to remove any visible mold, and mold-contaminated household items.  However, even if moisture is no longer present, mold that goes dormant will still continue to give off spores.  Oftentimes, mold spreads its roots (mycelia) into porous surfaces that often cannot be reached by the bleach.  This means that the surface may appear clean, but the roots of the mold will continue to grow.   As a result, professional remediation of water damaged areas is key to ensure that the entire area of contamination is removed.  If remediation is not possible or too costly, then moving may be appropriate.

For more information on how to join my gut instinct program, to run a DUTCH test and figure out what your hormone levels are, or to find out what’s living inside of your gut, click the link below for  a free discovery call.