Sources of Mercury and How It’s Impacting Your Gut Health

Sources of Mercury and How It’s Impacting Your Gut Health 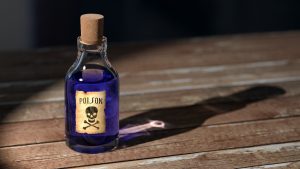 Mercury inside your body is more common then you think in today’s era.  Many people assume that if they had mercury stored within their body that it would be obvious and they would have severe symptoms.  However, you can have unhealthily high levels of mercury without being on your death bed.

Elemental Mercury: This is the form that I played with as a kid, also found in thermometers.  This form is not actually toxic for the body- it’s when it becomes inorganic mercury that it becomes problematic.  Dental amalgams (fillings) come in the form of elemental mercury.  The problems is that the amalgams are always off gassing and the mercury vapour gets absorbed into circulation in the body and becomes oxidized into inorganic mercury.

Inorganic Mercury: When elemental mercury turns to inorganic mercury, this is when it can interact with your enzymes, cell proteins and your membranes and really begin to impact function at a deep cellular level.

Organic Mercury (including methyl mercury, and ethylmercury): This form of mercury (methyl mercury)is commonly found in fish.  In fact, fish have 1-10 million times more mercury in their bodies then the water they are swimming in.  In the fish, the mercury is bound to the amino acid cytosine, which is in the muscle, not the fat.  So when you eat the fish, your body breaks down the amino acids, when the cysteine is freed, it still as the methyl mercury attached and the body assumes it is methionine and it is absorbed accordingly through specific receptors which are located in the brain and in the gut.    Mercury can also dump from mother in this way from to fetus in high levels, because the body think it is methionine, so it dumps it into the fetus thinking it is building up the fetus. Ethylmerucry is the type that is used in vaccines.

Mercury can deplete the body’s selenium reserves, which impacts anti-oxidant production and can lead to brain dysfunction.  It can also impact the central nervous system by increasing specific antibodies, leading to the development of autoimmune diseases. Mercury can also bind directly to sex hormones, impacting reproductive function.  In addition, mercury can impact enzymatic reactions, and act as a substitute for zinc, copper and other trace minerals.  It can also lead to mitochondrial dysfunction, thereby impacting the cell’s ability to produce energy.

The link to the gut

In terms of gut health, mercury, especially that swallowed from amalgams can block GI detoxification. It can also accumulate in the gut through the body’s absorption of it from fish, and the use of methionine-specific receptors (as mentioned above).   In addition, if your body has a high burden of mercury, it can promote candida overgrowth, as the candida is believed to feed off of the mercury.  As a result, the stubborn candida infections won’t be addressed permanently until you detox mercury.

Check out this video for more information!

Speaker 1: (00:01)
Hi. In this video we’re going to talk a little bit about something I haven’t talked a lot about, but I actually love to talk about which is detox and particularly we’re going to start diving into heavy metals and today’s hotspot metal is mercury. Okay, so it’s going to be some really juicy information about what mercury does to your body, where you can find it and why you want to think about detoxing. Before we dive in, I wanted to introduce myself for new viewers, so I’m Jodie – functional health practitioner and my expertise is in helping women with gut issues quite literally get your ships together so you can find me at www.healingjourneyservices.com or privately messaging me as well. When I have an amazing membership program called the Gut Instinct Membership, and when you join this membership, you get access to all of the lab tests that I’m talking about, and then you can also have this incredible group of women who are going to support you along your healing journey.

Speaker 1: (01:08)
Access to recipes, access to more intense detox information. We really do a deeper dive into the root causes of your gut health. And it’s at a much cheaper cost than doing one-to-one with the functional health practitioner or with me. So something to consider if budget is an issue and you’ve had enough of those gut issues.

So let’s dive in to mercury. Okay. So metals before we dive in is something that a lot of people have heard about, but nobody really thinks of them in relation to you. So let me tell you, if you are listening to this video, I guarantee you you have some mercury issues because we are all exposed to mercury. So where are you going to get mercury exposure? So one of the big sources of mercury exposure is actually fish. So these are going to be the top feeding fish like tuna, salmon, and Cod.

Speaker 1: (02:07)
It’s also present in shellfish, so if you’ve eaten fish ever, chances are you also have mercury exposure. Unfortunately, this is a really sad thing to say, but it’s true. Mercury has also been found in vaccines,  currently and historically. Historically it’s been found in contact solution, which I actually didn’t believe when I first heard and did a lot of research into. And it is true in certain contact solutions. Thermisol, um, believe was put in contact solutions and that’s actually form of mercury. It’s found in some Chinese herbs. It’s found in colored tattoos. If you’ve had a tattoo, instant mercury exposure, Ajax, Lysol, Comet , dove soap, an ivory liquid. So, there’s lots of sources of mercury that you are likely being exposed to, especially for a lot of people. You know, historically they, you were vaccinated, you’re going to have that mercury exposure.

Speaker 1: (03:07)
So, there’s different types of mercury. There’s elemental mercury and this is what you’re going to get mercury in dental amalgams. And that’s another huge source, especially if you are of the generation where you’ve got fillings. If you’re the silver filling, chances are that it has mercury in it. Um, organic methylmercury, and this is what’s going to accumulate in your fish. And then there’s also some types of inorganic mercury. And this is typically found in fungicides and disinfectants. Okay.  And you know sometimes people say, well I tested my blood and I didn’t see mercury. Of course you’re not going to see mercury in your blood mercury and most heavy metals once your body’s exposed is actually going to be how the deep inside the cell. And the way to test for that is you actually have to take a chelator and push the metals outside of your cells, and then excrete, have the body excrete them and then you can actually test the level and get a good indication of how much metal is being held on by your body.

Speaker 1: (04:11)
So I do not recommend that you go out and chelate your metals right now because that is very unsafe. But if you’re looking to test, that’s how you do it. And I’m about to run and having those tests. So follow me for more information about how to do it and what I find cause I’m super excited about that part. But that’s why it’s not showing up in your blood work of course, because you really have to find a way to pull it out of your stuff. So what are some symptoms of mercury toxicity?  So the brain is actually the primary storage site of the mercury and so it follows that you’re going to have a lot of  brain fog or confusion or difficulty thinking associated with that source of mercury.  It’s also going to accumulate in your kidneys and in your liver. It has like a pretty big impact on your immune system.

Speaker 1: (05:01)
It has a big impact on your hormones and it has a big impact on your muscles as well. And we’re going to dive a little bit deeper into that impact in a little in a minute. Um, so some other symptoms are weakness, fatigue, anorexia, weight loss, GI issues, tremors, depression, anger, anxiety, hypertension, heart disease and stroke. So we’re really not looking at some very fun issues when we’re thinking about mercury toxicity. And the reason is because mercury can depletes the body’s selenium reserves and selenium and mercury are kind of like opposite on the elemental scale. And so we have a lot of mercury, it’s going to deplete it and it’s going to lead to brain dysfunction. So that’s how you get that happening as well. Mercury is also going to impact your central nervous system and it’s going to increase specific antibodies and it’s going to lead to the development of autoimmune diseases, which again, on not a lot of people think about.

Speaker 1: (05:58)
Mercury, mercury also binds to sex hormones and it impacts reproductive function and a lot of other issues. But what I really want to narrow in on is how it’s impacting your gut. And the truth is, and this might surprise you, is that metals like mercury actually feed parasites. Okay? So the more metal toxic you are, the higher the chance you’re going to have parasites.  Parasites, and mercury and candida go hand in hand. So with candida, what actually happens is a candida is going to start consuming the mercury. So it’s [mercury] actually a protective factor for your body because it’s consuming the metal that’s harmful for your body. And so this is why if you’re doing multiple candida cleanses and the candida keeps coming back and you’re cutting out sugar and you’re doing all of this stuff, chances are it’s because you’re not addressing the metals.

Speaker 1: (06:53)
And that’s really the root, not the candida. The same thing goes with parasites. So if you’ve had worms or you know, chronic parasite issues despite herbal protocols and you haven’t looked at metals, this is a huge missing link. Worms, for example, hold more metals than your body does [in terms of concentration]. So again, it’s another protective factor. So you really need to address metals like mercury before you are, you know, dealing with, or as you’re dealing with the parasites. So sometimes depending on how complicated your case is, you’ll do a bit of metals work and detox or minerals work. And then you go back to the parasites and you’ll kind of like eventually bring it down. But you don’t want to be detoxing those metals right away because if your body doesn’t have enough minerals to support the detox, for example, if you’re not building up on the selenium before you’re detoxing the mercury, then you’re going to have a huge issue because your body is not going to be able to function because that mercury starts to play some sort of role in your body. And so you need to build up the minerals before you’re aggressively, and I don’t even recommend aggressive pulling those metals out. So the moral of today’s chat is that it’s really, really important to be thinking about metals, figuring out what [your] metal levels are, and then working on your minerals before or after you’re doing parasite work because they have to go hand in hand if you live in this day and age, even if you don’t eat fish.