3 Ways to Tell if SIBO is Contributing to IBS Symptoms 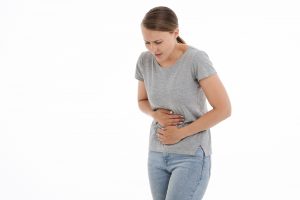 SIBO – which stands for small intestinal bacterial overgrowth is often a main contributor to IBS-like symptoms.  In a previous post, I talked all about what SIBO is.  Read more here.  In this post, I’m going to give you 3 ideas to get a sense of whether SIBO is something that is happening inside of you!

Before we go there, let’s review the key symptoms associated with SIBO.

The signs and symptoms of SIBO include:

Sign #1:  You Test Positive on a SIBO Breath Test

By a landslide, the most accurate way to confirm the presence of SIBO is with the SIBO breath test.   You may be wondering how your breath can possibility tell you what’s going on in the small intestine.  Let me break it down for you.

As a part of this test, you are required to drink a solution (lactulose) that is designed to feed the SIBO.  If SIBO does exist, the bacteria will ferment any mal-absorbed carbohydrates and produce hydrogen and methane gas in the small intestine.  About 20% of these  gasses are then absorbed into the bloodstream and released via the lungs.  The test requires breathing into tubes over the course of 3 hours, to capture any H2 and CH4 gas production.  Because these bacteria are the only producers of these gases, it is a direct indication of whether this infection exists.    Based on the timeline of gas production, you are then able to infer where in the small intestine the bacterial problem exists.

With a SIBO breathe test, not only will you be able to confirm the presence of SIBO, but you will also be able to tell whether you have hydrogen dominant SIBO, or methane dominant SIBO, or both  Why does this matter? The treatment of SIBO will depend on which type you have, so it’s important to be in the know.

The other reason that the breath test is essential is because you need to monitor your process.  There are a variety of SIBO treatments (more on this in a future post!) However, not all SIBO responds equally to each treatment. The SIBO test acts as a baseline for treatment – if it’s not working, then you will need to change to a different approach.  Sometimes more than one round of treatment is required to fully eradicate the treatment – and the SIBO test will also tell you how much progress you have made with each treatment.

Your symptoms could also be a result of other infections – so a SIBO breath test will be able to rule in this issue.  This was the case with me, and several of my clients.  Their symptoms align with SIBO, but breath tests for SIBO comes back negative.  Something else in going on in these cases.  Testing will save you a lot of time from going down the wrong road altogether.

If you are serious about confirmed and irradiating SIBO, then a breath test is a must!

2) You Are Symptomatic When Eating Fermented Foods & Probiotics

The same is true for most probiotics.  For example, most of commonly consumed probiotics contains lactobacillus species. And lactobacillus is actually one of the primary contributors to hydrogen dominant SIBO (diarrhea).   This is why I recommend Megasporebiotic in my practice.  The bacteria is shocked into spore form, ensuring it makes its way all the way to the large intestine, making it a safe option for SIBO sufferers.

It’s important to note that there are other reasons that eating fermented foods may be causing you issues.  A breath test is the best way to determine whether SIBO is present.

#3) You Feel Better When Eating a Low FODMAPS Diet

Have you heard of FODMAPS? It stands for Fermentable, Oligosaccharides, Disaccharides, Monosaccharides and Polyols.  What a mouthful!  Essentially it consists of a list of foods that contribute to SIBO.  Because FODMAP foods aren’t absorbed completely by the small intestine, they make their way to the large intestine where they are then fermented by anaerobic bacteria and produce gas.    Eating a diet low in FODMAPS means that you are discouraging the growth of bacteria by limiting the food that they thrive on.  The Low FODMAP diet emphases carbohydrates that are easily absorbed early in the small intestine – preventing the opportunity for bacteria to feed off them.  So, if you eat a low FODMAP diet and feel better, or have reduction in symptoms, then then it is quite possible that SIBO is at play.

A low FODMAPS diet is not to be confused with treatment of SIBO.  More to come on this in my next post.  There may be other reasons that eating a diet low in FODMAPS  is helping you to feel better.  A breath test is the best way to determine whether SIBO is present

If you are interested in testing for SIBO, please go ahead a book a complementary consultation to learn Healing Journey can support you in this!