Not forgiving others and holding onto anger is like drinking poison and expecting the other person to die. 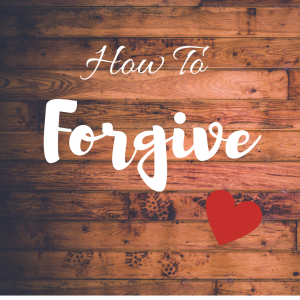 That which we have not let go of, begins to pile up and weigh down the soul, akin to walking around every day with a backpack full of rocks.
Forgiveness may seem like a simple concept, but it is one of the hardest things to implement. There has been considerable debate about the definition of forgiveness, but a widely accepted definition (by Everett Worthington) refers to forgiveness as the ‘process of decreasing inter-related negative resentment-based emotions, motivations and cognitions’.  The change in emotion is the key component of this definition as this shift is what is generally linked to the associated positive health outcomes. Louise Hay put a different spin on it, describing a lack of forgiveness as a ‘refusal to let go and come into the present moment’.
Personally, I am quite good at hoarding negative events. It seems the negative emotions associated with being hurt or disrespected sink deep into my being, and become entrenched there. So, when I was first challenged by Louise Hay’s book- You Can Heal Your Life to make a list of all of the people I needed to forgive, the task seemed extremely daunting and I avoided it completely. I knew that my list would be long, and yet I wasn’t even sure I had the capability of letting go. My rational was that I had been carrying around this pain for years, some of it since childhood, and wasn’t sure what change would assist me in releasing it.
Just like the process of physically decluttering my living space, there was a part of me that wanted to hang on to the bitterness, a part of me that was afraid of moving through the letting go process and a part of me that was afraid I would fail at it. There was also some avoidance due to the pain that remembering these events would unearth. In fact, the act of remembering past unforgiven events has actually been shown to increase blood pressure and trigger other physiological responses. But the cost of holding on simply stopped being worth it for me. These past transgressions that I wouldn’t let go of loomed over me like a dark cloud that held me captive in an identity that was no longer accurate.
The ACE (Adverse Childhood Experiences Study) found that there was a correlation between childhood stress and trauma and negative health and wellbeing later in life. The larger the number of stressful events, the greater the likelihood of health conditions such as depression, liver disease, drug use and heart conditions. Perhaps this is in part due to a lack of forgiveness and an inability of the ‘victims’ to let go.  Unforgiven deeds do in fact have an impact on health. Research has shown that individuals who are more forgiving in nature have decreased negative affect associated with anxiety and depression, a decreased risk of drug use, lower blood pressure, and decreased levels of pain.
In my struggle to find forgiveness, I was drawn to a book called Amish Grace. It explores the true story of how an Amish community was able to forgive the perpetrator who entered into a rural school house in Nickel Mines in 2006 and shot and killed 5 school girls while injuring 5 more before turning the gun on himself. Not only did this community forgive the shooter instantly but they also were able to embrace the family members that the shooter left behind (he had a wife and three children) in the wake of his destruction. The world was in utter shock by the grace through which the Amish community was able to deal with such a deep crime of hate, and also by the compassion that the community showed the shooter’s relatives. In fact, the Amish’s compassion provided a lot of healing to the devastated wife and family who carried around the shooter’s guilt. The Amish, sourcing faith as a key enabler of their forgiving behaviour, felt they had little choice in the act of forgiveness – if they could not forgive others then God could not forgive them. What struck me in this story was the humanness in such grand actions of forgiveness. The Amish often had to practice forgiving the assailant again and again. It was also apparent to me that if they could give someone for killing their children, that I too had the capacity to let go of past cruelties I perceived to be committed against me.
The process I wanted to go through for forgiveness was strikingly similar to that described in Marie Kondo’s book, The Life-Changing Magic of Tidying Up. Much like her process of holding each item and choosing to discard it or treasure it based on whether the item evoked joy, I had to pick up each ‘wound’ and examine it, feel the pain, and then decide whether or not it was worth holding on to. I was decluttering my mind.
The act of forgiveness can be difficult. It does not mean that you are condoning, pardoning or excusing the behaviour of the other person. Nor is it about invalidating our feelings associated with the event.  It is giving up our right to anger and resentment. As Robert D. Enright so aptly put it, “When unjustly hurt by another, we forgive when we overcome the resentment toward the offender not by denying our right to resentment but instead by trying to give the wrongdoer compassion, benevolence and love.”

Forgiveness can be seen as a gift to the offender, but in fact it is a gift to ourselves.

During my list making of all of the people I needed to forgive, I was surprised to find a childhood bully high up in the rankings. The events had taken place more than 25 years prior and the memories were murky in my mind, and yet the unsettled feelings and the pain still lingered. When I started to do EFT (Emotion Freedom Technique or tapping), I was surprised to find tears streaming down my face. All of these years I had been carrying around this deep pain from childhood. My forgiveness in that moment had no impact on her. On the contrary, my forgiveness of her was my gift to myself. It was through acknowledgement of my pain and validation of my own emotional experience that I could begin to release it. Once released, the window opened for me to invite compassion for this girl, to emit love for her, and thus engage in the emotional transformation that is required to truly forgive.
There was nothing exciting about this process, in fact, it was exhausting. Initially the rewards were nothing but tiny bursts of lightness. But eventually, like the act of decluttering, or training for a race, the gains begin to pile up.  I started to notice the lack of clutter and the lightness and it became rather freeing.
Forgiveness is a state of being. I made the mistake of assuming that after engaging in a full ‘spring cleaning’ I could close the door on this task.   However, the list of unforgiven transgressions began to pile up again. Forgiveness, much like cleaning, requires continual maintenance. It must be a regular task you engage in.
Troubleshooting: Forgiveness of specific incidences, perhaps those that are particularly impactful or traumatic may be best accomplished with the support of a professional. Please don’t be afraid to seek out a therapist.
If you find you get stuck, EFT (Emotion Freedom Technique) is a great technique to shift the emotional energy associated with the trauma. In his book, The Tapping Solution, Nick Ortner dedicates an entire chapter to forgiveness and letting go through the use of EFT. Brad Yates also provides guided EFT in this area.